This is a peer review for Alyssa’s website — ASL Sandbox.

ASL Sandbox is a “design sandbox” themed website where Alyssa showcases her creative portfolio and design-related projects. The website is set with a sans serif font and an easy-going yet professional tone, which works for the kind of content she is showcasing. Theme colours are black and white with yellow buttons, and there is ample negative space on either side of the pages.

The “Home Page” is fairly neat and simple. Lay-out appears strong and coherent, and I get the vibe of straight-forwardness from just looking at the home page. The tone of the text seems kind yet stern, adding to the overall aesthetic of the site. Alyssa writes about the variety of different projects and creative works she has done so far, and the ones she wants to highlight are placed right below the text.

I think a bit more information about the projects, the inspiration behind them and slightly more colour to the theme would make the “Home Page” stand out more. A solid logo would also work.

This is perhaps my favourite page on this website. The photograph chosen is warm, friendly and inviting (and Alyssa looks great in it!). The text comes before and after the photo, which also works well for the viewer as it feels like she has important things to say, and not just about her brand, but also herself. A little more information about Alyssa’s passions beyond design, what her likes and dislikes are, what she likes to do in leisure time, if she has pets or not — these things might add to the personal touch in the “About” section and make it even more inviting. Otherwise it looks wonderful!

The “Projects” page is fairly simple and it works — it consists of the major design projects Alyssa undertook over time. There are different kinds of projects, like “Illustrations” or the “Vogue Magazine” cover. This shows her versatility and this is what her audience will search when looking at her portfolio for various job opportunities.

Again, I think the page could have some more colour and warmth to it. What inspired you to get into these projects, what drew you to them? Your motivations and stories behind the work that you do makes your work stand out from others and might increase your possibility of getting hired for the position/job/opportunity that you are seeking.

Overall, Alyssa’s website is off to a wonderful start. I think a slightly more personalized touch that showcases her personality will make this website even more appealing and make it stand out, as I mentioned before.

Also, why did you name your site ASL Sandbox? ASL is usually associated with American Sign Language, but putting the reason for why you chose the name will also add more depth to the site.

As a new semester rolls out, this website is about to go through some changes. But worry not! They aren’t bad changes.

CaffeinatedTammy is going to hold its essence, but turn into more a commentary site which will focus on gender and BIPOC disparities in social media, and how it influences the regular folks like us! For years, I have been told that a woman of colour will always have to work three times the amount of a work a white man does. Why? Because we fight two battles at the same thing — Gender, and Racism. Add Colourism to the mix, and you’ve got yourself a disparity trifecta, something most Brown women have to tackle when they live in the West.

I had always been concerned about such disparities in our society, but it enhanced by a tenfold when I moved from India to Canada in 2019. Then COVID-19 hit, and the TikTok surge took us to a hermit-like stage, where all we care about is what people are posting on their social media.

This past few months, we all saw the rise of Alix Earle, a content creator who blew up on TikTok in December 2022. Her rise to fame and being dubbed the “It Girl” of social media happened in a mere span of months, which is unusual. It sparked conversations around her social media growth and people even used the tags “Alix Earle social media growth” a ton in their feeds. A 22 year old white woman studying in University of Miami, Alix has become popular due to her friendly and friend-like persona, which her followers love and adore.

But what strikes me as odd, is how easy and quick it is for white women to gain a following and popularity, compared to her pop counterparts? This requires a disclaimer: I view Earle’s content, and I do follow her on social media. I think her content is wonderful and engaging, and there is nothing wrong with gaining over a million followers over the short span of a few months. This series of calling out disparities isn’t to attack Earle, but to bring attention to how hard BIPOC women are working to gain the same access to opportunities that Earle has gotten in mere months.

The main POC influencer I want to focus on is Alix Earle’s friend and another popular content creator, Monet McMichael. With a following of 2.4 million followers, McMichael is a fan-loved influencer. However, she has been working in this position for much longer than Earle, and her social media content is very similar to the former’s. What strikes me as different is their journey to popularity on TikTok and Instagram, where Earle leads the scoreboard, despite being a fresh, new influencer. 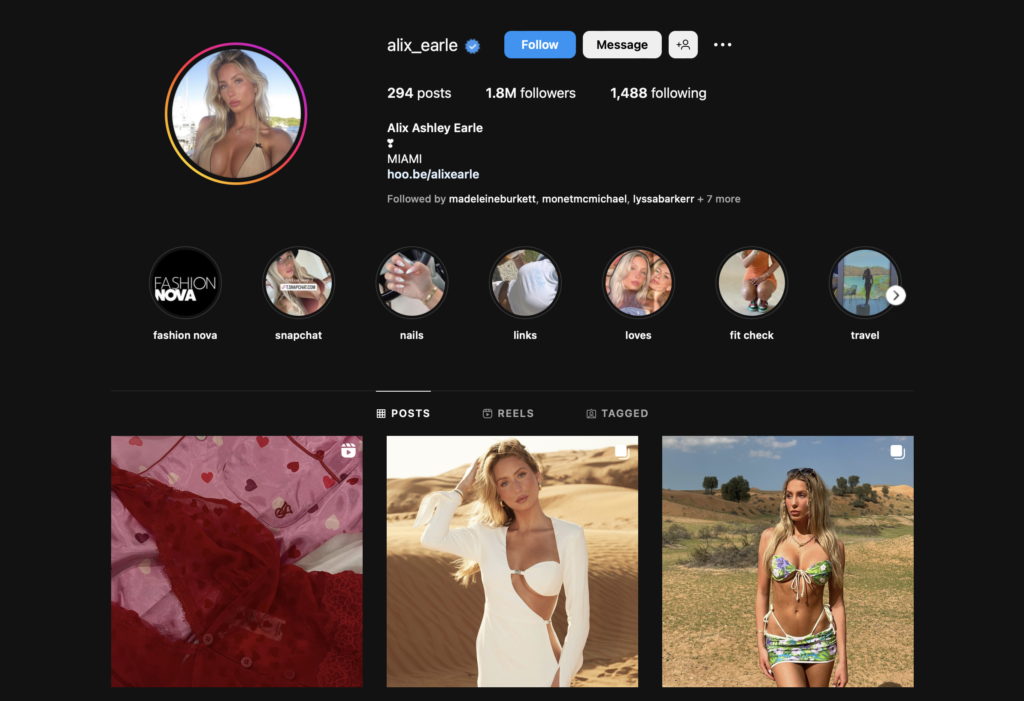 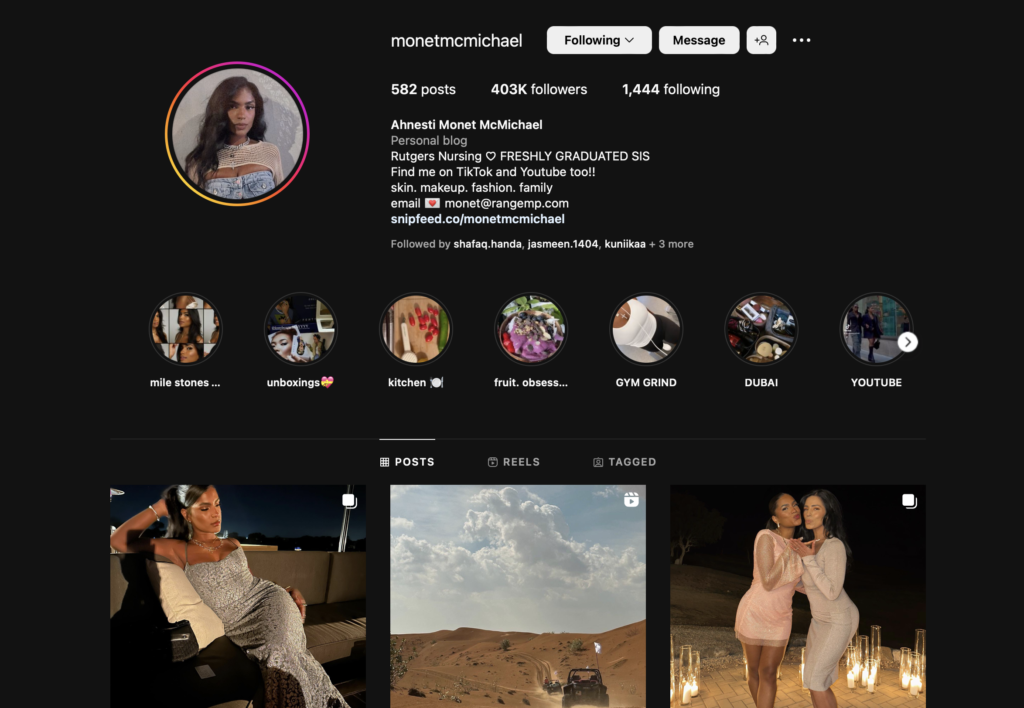 Through the weeks, I will focus on the different ways influencers gain following and make their followers feel engaged and special, starting with McMichael.

How I Became A Babysitter

Working in retail comes with having to be social, especially with strangers. So I wasn’t new to this idea of talking to a random person on a sunny day.

I came across a woman that was visiting the store. She was staring at the jean wall in dismay, and I asked if she wanted help. She said yes, and I found her a few pairs of jeans to try on in various styles and lengths. She had her parents, who were visiting from New Jersey, and her little baby with her. While she tried on different things, her parents and I got into a conversation. They were visiting their daughter after the pandemic, and they were very happy to see their little granddaughter! I cooed and ah-ed the baby, I absolutely adore them. I got to know more about the woman and her family after chatting with the grandparents, and then the woman decided to buy a few pairs of jeans. We talked again at the cash register, and I told her if she ever needed a second hand, I am an excellent babysitter (being social requires you to offer your services at times!). I am always nervous to tell people I am a babysitter, because you never know what kind of people you can come across. But I had an inkling that these are good people. The woman took my phone number and said she’d tell me if she ever needed help. And she did! I babysat and hung out with the little baby for a few hours, and off I went back home. It was quite the experience, and I was surprised that I had it in me to go all the way to someone else’s house to spend time with their baby!

I often find it hard to socialize, even though I do it on a regular basis at work. I aim to one day be naturally social and hold conversations with confidence and class, and doing all of that without fumbling or feeling a nervous pit in my stomach. I have found that having small conversations can often lead to the most wonderful friendships, and that is why I continue to talk to strangers everywhere, no matter what. It can also brighten up someone’s bad day if a random stranger is kind to them, even if you say a small hello or namaste, you never know the difference you’re making when you’re doing it with a smile.

When was the last time you talked to a stranger and was kind to them?